And take it they did, there were some truly amazing golf moments that we’ll get into in the rest of the article.

If your the golfer who you think shuold be on the list of the best golfers of the 2010s isn’t in our list, remember: golf has always been a game of expecting the unexpected.

So let’s get into the best golfers of the 2010s, in no particular order, and see what you can learn from the way they play!

Bubba Watson had 12 wins in the 2010s, 2 of them being Majors. He’s played some amazing golf throughout his career, but what is most notable about Bubba is his drive swing.

If you watch Bubba swing with his driver, you might notice that his backswing is incredibly high and follows an almost vertical plane.

While this approach may not be suitable for beginners, or even intermediate golfers, it undeniably works wonders for Bubba.

Bubba’s high backswing, however, can only be properly utilized with the activation of his legs, which he uses masterfully.

He almost stamps during his downswing, using his legs to drive through the ball and generate enormous power.

In the 2010s, Jason Day had 12 tour wins, 1 major and 1 players championship. He also held the 1st place in the World Ranking of Golfers back in 2015, officially making him one of the best golfers of the 2010s!

What’s interesting about Day’s swing is his tempo. It’s like he’s swinging to beat!

This is what has earnt Justin Day his spot as one of the best golfers of the 2010s.

If you watch Day swing, some of his shots look almost identical. This is because his swing tempo is so perfectly consistent, even while the movements of his swing may change over time.

During the past decade, Justin Rose won 10 tournaments, 1 major and 4 Euro Tours. He also became the first Golf Olympic champion since 1904 when he won Gold in Rio 2016.

Putting grips are specific to each player, and there many different grip styles you can try out to see what works best for you!

Phil Mickelson had 7 wins in the 2010s, 2 majors, and finished in second place on 5 majors.

While Mickelson plays great on all types of shots, he’s most famous for his recovery shots. Somehow, seemingly more than any other professional, Mickelson finds himself in a tricky position with a miracle needed to get him out.

Feeling confident going into a recovery shot is a skill that all golfers can benefit from, and no one does it better than Phil.

So if you wish you had made it into the best golfers of the 2010s, remember Phil Mickelson and see your shot as an opportunity rather than a failure.

Justin Thomas came out of the 2010s with 11 wins, 1 being a major. While he’s not known for his innovative swing technique or antics on the course, there’s still alot that can be learnt from a golfer with this level of skill and consistency.

If you watch Justin Thomas swing with his driver, you might notice one important thing: Justin opens his hips a lot earlier in his swing than most golfers.

Just like another on the list of best golfers of the 2010s, Bubba Watson, he has a very steep backswing which means he has to use his legs more in his swing.

By opening his hips early in the downswing, he’s able to angle his legs away from the ball as he swings through it. This movement, if done correctly, can generate massive amounts of swing power.

But be careful if you’re thinking about trying a steeper backswing, it takes a lot of practice to get it right!

Brooks Koepka has 7 tour wins, 4 majors, and won Player of the Year in 2018. While his accomplishments are impressive, what makes Koepka one of the best golfers of the 2010s is his skill.

What makes Koepka an exciting player to watch is the sheer power he is able to generate in his swings. Koeopka is definitely a player who knows how to hit the ball far.

While hitting the ball far doesn’t necessarily mean you’ll make the list of best golfers of the 2010s list, it can definitely help improve your game.

Koeopka is a master of squaring his club in his backswing, which can help you hit the sweet spot with every swing.

This is important when trying to hit a long and straight drive, even though Koepka prefers to fade the ball, as it can make you a more consistent player.

While Tiger arguably didn’t have the best decade due to injuries and hiatuses from the sport, he still came out of the decade with 11 wins, 1 major, and Player of the Year in 2013.

Many golfers wish they could play like Tiger Woods and there are plenty of ways to emulate his style, but maybe the most easily applicable is this: keep it low and wide.

While some of the other best golfers of the 2010s like to keep their backswing high and sharp, Tiger goes for a low and wide approach,

This swing technique creates a good amount of lag in your swing, which can be really useful for generating power.

Keeping your takeaway low and wide also increases the distance between your club and the ball at the top of your backswing, so there’s more room to pick up speed and power.

While some traditionalists may not like Spieth’s unconventional technique, with 11 wins, 3 majors and 4 Euro Tour wins from the decade, there’s no doubt that he was one of the best golfers of the 2010s.

Spieth’s ‘chicken wing’ swing technique has come under fire before, but the results are inescapable.

Rather than keeping his front arm completely straight, as all golfers are taught to do, he maintains a slight bend at the elbow, which has been crowned the chicken wing!

So should you adopt the chicken win? That depends.

While Spieth is still able to hit long and powerful shots, his technique is engineered for consistency, rather than strength, and that is what makes him on of the best golfers of the 2010s.

It’s all about the angle of contact and his club strike, and don’t forget years of intense training.

Spieth’s club head twists through his downswing, ensuring that he always gets a great angle of contact and club strike. He might not be the hardest hitter in the world, but he definitely deserves his spot on the list of the best golfers of the 2010s.

Johnson is famed for his drives. There’s no denying just how good he is with the driver, and how impressive the power he can generate is.

Something you can take from Dustin Johnsons skill on the course however is his use of AimPoint Putting.

AimPoint is a putting technique that is easy to use and learn and can help you out in a tough spot on the green.

We’ve got a great article on Golf Guidebook that goes more in depth on how and why you should use Aimpoint to improve your putting skill!

While the rest of the golfers on this list of the best golfers of the 2010s have been placed in no particular order, Rory McIlroy definitely deserves the number one spot.

It’s well known just how skillful McIlroy is, his swing is a thing of beauty and it’s application of the fundamentals that has helped him achieve this.

If you watch McIlroy get into position with a driver, his stance is nice and wide, his shoulders are squared, and his spine is angled away from the ball to help him pull that driver back even further before unleashing it.

But it’s his skill and prowess with every club that has earned him our number one spot.

He possesses the much desired skill of making an incredibly technical game look easy, even making the famed, and fearful, 17th hole at St Andrews look like a pitch and putt.

The best thing to learn from McIlroy’s game is that golf is a game worth playing, because there’s always the chance you could hit a shot as well as him!

So while for many of, the dream of becoming a professional golfer may seem like a long stretch, it’s always worth picking up a new technique or skill and seeing how you can use it.

Now you’ve read about the pros, learn how you can become one! 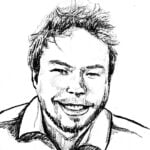