When playing golf with the same buddies, on the same days, and on the same course, it can be easy to lose enthusiasm about the game.

At times like these, you need something to spice things up and reignite the passion – and that’s where golf side bets come in.

Golf side bets, also known as golf side games, are the perfect solution, mixing up your matches with higher stakes and great ribaldry from start to finish of the round.

With these 10 great side bets, your group has a bunch of different options to try out on the course. The beauty of these particular golf side bets is they work for golfers of any standard, meaning everyone is included.

Let’s get started with spicing up your golf!

10 Fun Golf Side Bets To Spice Up any golf game

This is a simple one to start with. There are multiple options but the most popular are:

Each of these supplementals has an agreed stake. If a player wins none all day, they could be paying out quite a few bets – so make sure to set the stakes low accordingly!

The only downside to these golf side bets is that they tend to favor more experienced golfers -who have probably also won the main golf game!

Snake is a popular golf side bet and a super fun game to play, with the drama unfolding from the first swing right through to the end of the round.

What is a snake? Quite simply it’s a 3-putt – every golfer’s nightmare!

For this golf side bet, players agree on a stake and this amount accumulates throughout the round with every 3-putt.

Players must putt out in turn on every hole for parity, as there may be holes when more than one player 3-putts.

The last player to 3-putt holds the stake and they keep it until another player 3-putts. They then hold “the snake”. Whoever holds it at the end of the round is the loser.

This person may have just one 3-putt, unfortunately, it just happened at the wrong time. That is the beauty of the snake.

Once again, your stake for each 3-putt will be governed by the group’s playing standard. If they are a rarity, then make it worthwhile, but if they are a regular occurrence, then tone down the stake.

Generally speaking, the proud owner of the snake at the end of the round’s financial punishment goes straight into the drinks fund. The rest may well have a free bar to enjoy!

This is a variation to the snake golf side bet game as it is based on three-putting – or worse!

How does it work?

Imagine the group has reached a huge green and one of your buddies faces a tough putt. You are pretty confident that they may 3-putt and back this claim by calling ‘Shazam’.

Every other player in the group can also call Shazam; there is a possibility that 3 bets are now live for the golfer facing this tough putt. Now the fun starts.

If you are correct and the player does 3-putt, then they owe the agreed side bet to everybody that called Shazam. Even worse if they 4-putt, the stake doubles.

A solid 2-putt and no money passes hands but if that miracle happens and they hole the first putt, then everybody that called Shazam now owes them double the stake.

There is another twist to this side bet for the confident putter or somebody desperately trying to win back some cash.

You can Shazam yourself at any time if you’re on the green and more than a flagstick-length from the cup or another agreed distance. You win from everybody if you make the putt, break-even if you 2-putt, but if you 3-putt here, you lose double the stake.

This is a really fun golf side bet and a good way for learning to putt under pressure.

It may sound like a cheesy pop song, but Bingo Bango Bongo is a points-based betting game where scoring well doesn’t necessarily win you the match. Once again this side bet is based on what happens on the green.

On each hole, points are awarded for three separate achievements and play must be in turn:

The goal, as you can probably guess, is to earn the most points during the round. There are 54 points up for grabs so just be mindful when setting the betting stake.

This is a fun golf side bet for newbies as it’s a points game that de-emphasizes pars, birdies, and scoring in general. It also tends to equalize players of different levels.

Warning: This can slow down a fourball/foursome because it discourages ready golf, but is manageable if you are aware of this potential pitfall.

This great and somewhat complicated golf side bet has many names but as it is based on animals, we will call it Zoo. The snake is incorporated into this game along with the following:

So with Snake outlined above, there are 5 running bets in total and you want to avoid holding any of these animals come to the end of the round. Once again the bet increases throughout every time a player is penalized.

The total fees owed will provide a nice drinks fund and hopefully, the holders of the animals come the end of the round will be shared amongst the group.

If one player ends up as the Zookeeper, it may be an expensive day out!

#6: Golf side bets: Fairways and Greens

Another points game and an easy one to manage.

Like Bingo, Bango, Bongo the payout to the winner could be made simpler with the runner-up paying $5, the third $10, and the fourth $15 as an example.

Points are awarded as follows:

This isn’t exactly a golf side bet as such but is a great add-on and will particularly help the higher handicap golfer.

The allowance takes ‘pick and place’ into a different stratosphere! Players can ditch a less-than-desirable shot and move their ball to where the best ball is positioned with no penalty. Back in the game!

This is permitted on any type of shot except for putts. You lose a drive and somebody bombs it down the fairway – take a Metoo and now you are playing your second shot from this drive. An opponent stiffs an iron shot on a par 3, then take a Metoo to match this shot.

You decide how many are allowed before the round; a good way to go is varying the amount according to the level of the golfers:

Use them wisely and if you can keep one in the bank for the end game in a tight match, then happy days! These help keep matches keenly competitive.

This is a rolling game that runs for a whole season. You can run multiple Eclectics if your group regularly plays on more than one course and works well for a larger-sized group over and above a regular group of four golfers.

How does it work? The concept is simple. Let’s just deal with playing one course to explain and an example scorecard will help you understand.

The first round is your start score for every hole recording the nett score for each player. Somebody responsible will take ownership of the group’s scorecards to produce them for the second round (and subsequent rounds) on this course.

If a player has a lower nett score on any or multiple holes they cross out the original score replacing it with the better, lower number. This process continues each round until the agreed end of the Eclectic season. In theory, the final score will be a pretty low number.

The table below is a sample scorecard and changes. You need only to record any improvements on the Eclectic card.

The scores will be tight come the end game near as the golf season draws to a close.

At this stage, trying to improve your score becomes much harder as there may only be a couple of holes where it is realistically possible to do so – without a golfing miracle such as a Hole-in-One.

Make this prize pot worthwhile as it will be running for the season. A preferred option is for the Eclectic winner to get a free night out at a favorite restaurant as their prize that is paid for by his golfing buddies.

Having just explained one rolling golf side bet, how about setting up the ultimate long-term side bet – or maybe not, who knows.

Within your group, every player pays a small amount, it may be $1, it may be $5 every time they play. You will need a good, organized accountant/banker to keep track of this!

This all goes into a fund that is finally paid out when any player in your group of golfing buddies scores a Hole-in-One that is witnessed by at least one other player that is participating in the scheme. God forbid you get an ‘ace’ with no witnesses!

This pot will soon accumulate. It may be years before an ace is recorded!

My story about such a fund was from a group of visiting golfers that I caddied for at my summer home course, the majestic Royal Dornoch. They were a group of 8 that holidayed somewhere every summer and they put in $50 each into a Hole-in-One fund on every trip.

This was finally won after 16 golf trips. The winner pocketed 16 x $400 making up a whopping $6400. Now that is worth winning! Sadly the ace was not recorded on their day with us as bonuses may have been forthcoming – it happened two days earlier at Royal Aberdeen.

Related article: How To Play The Chapman Golf Format And Win

Time to Place Those Bets!

There we have it. 10 fun golf side bets for every golf game. Plenty of options. Plenty of fun to be had. Plenty of trash talk to be delivered!

Don’t overcomplicate things – pick just one for any day out!

We’d love to hear from you telling us the tale of the tape about which fun golf games you have tried and which is your new favorite.

Why Not Match You Golf Side Bets with Some fun golf games? 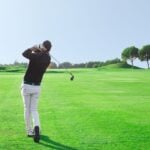