If you asked who the longest hitters of the ball were in golf, there’s no doubt John Daly’s name would be on that list.

PGA professional and two-time major winner John Daly has one of the most powerful and frankly iconic swings in golf.

Known for being unorthodox, the John Daly swing is a mesmerizing sight that is characterized by a larger-than-life backswing and aggressive tempo.

This is a golf swing that allowed Daly to become the first player to break the 300-yard PGA tour average off the tee in 1997 and, over his career, earned him the household nickname ‘long John’.

The talent and eccentric profile of the Californian-born golfer have made Daly one of the most exciting players to watch in the sport, but the question is:

What can we learn from the way John Daly swings the club?

After all, we’d all love to be able to hit the ball as far as long John!

Look no further, as this article will dissect the John Daly swing and analyze it through each key stage of the swing sequence to find out what it takes to hit the ball like John Daly!

Let’s start by taking a look at how Daly sets up to the ball.

For a golf swing designed for out-and-out power, Daly needs to create a solid foundation that can accommodate this.

He does so with his foot placement, by taking a relatively wide stance and ensuring his lead foot is flared out significantly toward his target.

Flaring the lead foot in this way invites Daly’s swinging momentum to continue past the point of impact so that club head speed can be maximized at the time he makes contact with the ball.

Without flaring your feet in the golf setup, it makes it awkward to complete a full body turn in the swing, and, when power and distance are your objectives, you simply won’t be able to stay balanced!

The next key aspect in John Daly’s setup is his grip on the golf club.

In contrast to what you might imagine from such a powerful golfer, Daly boasts a fairly loose grip at address, with the club held more in his fingers rather than grasped tightly in the palms.

Taking a closer look at his grip, you’ll notice his trail thumb (right thumb) hovers across the club shaft as opposed to pressing on and pointing down the shaft like a conventional grip.

Daly relies on generating power from the larger body muscles and the enormous length of his swing, as opposed to the strength of his grip and wrists, which we’ll get into next!

If there’s one aspect that steals the show in John Daly’s swing, it’s his ultra-long backswing.

Daly draws the golf club back much further than a conventional backswing to the stage where, at the top of his swing, his club shaft travels beyond the parallel point with the ground.

If you pause Daly’s swings at peak extension, you’ll see a familiar sight where his club head points back down toward the ground.

Now typically, this would be classified as an overswing in golf which can be problematic since the further back the club is drawn, the more room for error on the downswing there is.

However, for Daly, this is one of the main ways he achieves enormous power in his swing, and has the seriously impressive skill and precision to pull it off.

How did he arrive at such a distinctive backswing you ask?

The origins of Daly’s swing come from when was handed a set of adult golf clubs at the age of 4. He never had them resized and so, due to the length and weight of them, when he took the clubs back, they just kept on going!

To draw the club back that far, Daly performs a huge body turn to match.

He is a firm believer that distance is achieved by working the whole body in unison in the swing.

In light of this, when drawing the club back, you’ll see Daly’s hips mirror his shoulder turn.

The hip turn can be something a lot of amateur golfers neglect while focusing on their shoulder rotation, but the two are crucial in loading potential power in the swing by coiling the body.

This puts Daly in an extremely athletic position at the top of his swing with a steep angle of attack, ready to meet the ball with venom in his transition.

The next signature feature in John Daly’s takeaway sequence is his lead heel which raises high off the ground and, by extension, his lead knee bend is exaggerated.

Lifting the lead heel in this way helps maximize the amount of rotation allowed in his body to achieve the large backswing he is famous for.

This is also key for the aggressive weight shift from the back foot to the front during Daly’s transition, where he has the ability to stamp forward into his downswing.

The final aspect of Daly’s backswing is his club path, which takes a wide route deep to the inside.

Daly is an advocate for the ‘low and slow’ approach on the way up, which certainly contrasts with the way back down!

This swing thought adds important rhythm to his swing, key for striking the ball consistently.

How Daly gets back to meet the ball cleanly from this stage of his swing is a mystery to most, but he finds a way!

From the top of his swing, John Daly has one objective: Power.

To generate power, he finds ways of maximizing club velocity in his downswing.

Daly’s tournament swing speed average is 121.49 mph, which is third on the PGA Tour, behind only Tiger Woods and Bubba Watson. So if you’re looking to add club speed to your game, pay close attention!

Daly’s downswing is initiated in the lower body by clearing his hips first, which jumpstarts a quick uncoiling of the work in his backswing.

Leading the downswing with the lower body sets off a spiral of delayed motion in the upper body as the arms and club play catch up.

This introduces the next key way Daly is allowed to generate the impressive speed and power he does: Lag.

Lag is a golfing technique that Daly champions, using it to leverage his club head’s velocity so that it is at its fastest at the time of impact with the ball.

When watching the John Daly swing in slow motion, you can see how he cocks his wrists to delay the angle of his club shaft behind the line of his arms until the very last moment before making contact with the ball.

This creates a whip sensation on the way through and generates a lot of club speed.

The path Daly’s club takes in his downswing is a unique one that actually starts by pulling up, toward the sky. Yes, that’s right.

This is due to the position his club has to come from at the top of his backswing (pointing down toward the ground).

The effect of this lengthens Daly’s swing arc which gives more time for the club to pick up speed in a sort of slingshot motion.

His swing plane also changes on the way down, coming steeper and more over the top with an outside-in path to meet the ball.

This is called a two-plane swing in golf since it follows a shallower takeaway.

While this is going on, an aggressive weight shift takes place in Daly’s downswing where he uses his raised heel to stamp into the shot and propel his momentum forward to increase power.

You’ll notice Daly gets lower and leans back slightly as he arrives at impact. This resolves in a classical ‘reverse C’ body shape as he makes contact, which is a powerful position to hit the ball from.

Finally, let’s take a look at John Daly’s follow through.

Such a big swing comes with a lots of momentum, and that momentum has to travel somewhere after impact.

Daly rounds off his swing with a strong follow through he uses to channel this momentum and encourage his body through the shot.

A good follow through is essential for maximizing club head speed at impact because it removes the risk of slowing down or pulling out of the shot too early.

Right after the ball is struck, Daly performs a full extension of his arms and club which point down his target line.

This allows him to complete a full arc of his swing which eventually resolves in bringing his club over the back of his shoulders.

At the end of the follow through, Daly has his belt buckle pointing at his target, having allowed his shoulders to continue rotating just past his target line.

Daly’s trail heel tends to have already started lifting by the time he makes connection with the ball and continues to do so in the follow through, finishing on tiptoes.

You’ll notice he has a slight lean backward at the conclusion of his follow through which is an extension of his impact position and more of a classic finish seen in golfers who swing with a lot of speed.

So that’s our guide to the John Daly swing!

It’s no conventional golf swing, but undoubtedly an iconic one that has made Daly one of the biggest hitters in the sport.

John Daly is a refreshing example of sticking to your guns on the golf course – he’s developed a unique swing and style that suits him and has shown you can reach the top level doing so!

All that works for Daly may not work for you, but there are plenty of valuable takeaways from his swing if you’re looking to add more power and distance to your game.

So why not take to the range, trial what feels right, and see if you can grip-it-and-rip it like John Daly!

Keep Reading to learn more from the pros 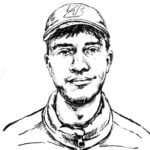