There is nothing more satisfying than hitting a sweet, pure iron shot. Despite not even feeling the ball as you hit it, you look up and see it skyrocketing towards the green.

We all dream of hitting these shots, and the professionals make it look like a breeze. But in reality, it isn’t that easy!

It can be quite frustrating as a beginner when your iron shots don’t go to plan, and it’s especially upsetting when you aren’t sure where you’re going wrong.

However, don’t get disheartened; we’ve all been in the same position starting off. With more practice and the right advice, you’ll be improving in no time.

In this article, we’ll explore the following:

Of course, as with most things in life, it will take time and practice to improve your game. The key to golf is consistency, and to achieve this you need to be hitting the ball time and time again.

That being said, there are a few simple things you can be doing straight away that will have you hitting your irons further…

How to Hit Irons Further – The 6 Key Elements

1. Choosing the best club for you

First things first, let’s be extra clear about the clubs in question here.

A set of irons typically ranges from a 3 iron to a 9 iron, followed by your wedges.

The lower the number iron, the longer the club will be and the more distance you are going to be able to achieve.

Choosing a lower iron like a 3-5 is really important for how to hit irons further, however they can prove a little tricky to use at first.

If you’re able to get hold of a set of irons, the 9, 8 or 7 iron are going to be the best clubs to start off practicing with.

Once you start hitting consistently further with these clubs, you can start moving our way down to the longer irons.

2. Hitting the ball first and the ground after

When it comes to hitting a crisp iron shot, you want the club face to first strike the ball, and then hit the ground with the follow through.

You may have heard of the term ‘fatting it’ being used in golf. This is when you hit the ground before the golf ball instead of striking the ball cleanly.

The ball will never go as far with a fat shot, as power is being lost in the ground before you hit the ball.

On the other hand, hitting the ball too late and on the upswing, known as ‘thinning it’, will result in an equally poor shot.

You want to make sure that you’re consistently hitting the ball first and the ground after. This is the key to striking the ball well and therefore hitting it further.

As a beginner, it’s likely that you won’t get this spot-on at first. So, let’s take a step back and think about how we position and move our body in relation to the ball.

3. How to set up properly

Before you even start swinging, you need to ensure that you have your body and ball in the correct position. This can be an easy fix to help you hit the ball first and the ground after.

Different irons are different lengths, so depending on which club you’re swinging, your ball position is going to be slightly different.

Starting with your mid iron, such as a 6 or 7, you want the ball to be sat just in front of center.

This means with your legs shoulder width apart, and with the ball positioned almost center but slightly closer to the left foot (If you’re playing with left handed clubs it’s the right foot).

Roughly one golf ball to the left from center is generally a good measure for a mid iron.

Body position is something that will be slightly different for each person, and ultimately it’s important to find what is comfortable for you.

However, if you use this as a general guide, you should find yourself hitting better and further iron shots.

It’s also important to think about your chest. As a rule of thumb, the bottom of your golf swing is going to match up with your chest’s position over the ground.

Make sure that the center of your chest is directly over the top of the ball, and, if anything, just slightly to the left of it (assuming you’re playing right handed).

Thinking about where you place the majority of your body weight in your set up and maintaining that whilst swinging is also very useful when starting off in golf.

It’s very normal to see beginners putting too much weight on their back foot. This is a common mistake as it’s natural to want to try to help lift the golf ball into the air, lifting your body backwards.

However, this normally leads to hitting the ground too early and ‘fatting it’, or catching the ball as your club is swinging up and ‘thinning it’.

Tilting too far backwards can also cause you to cup your wrists around, instead of having them strong and straight, which will decrease the power of your swing.

Try doing this instead:

If you can keep this weight distribution throughout your swing, feeling like you’re more on top of the golf ball, you will find it a lot easier to hit the ball first and the ground after.

The shot should feel a lot more natural and the ball should fly much further!

If you feel like you’re hitting the golf ball well yet for some reason it isn’t going nearly as far as it should, this might be because of something called ‘loft’.

Loft, which can be thought of as the angle between the iron club face and the ground, is an important part of the club design that varies a lot depending on the iron.

The wedges and shorter irons such as an 8 or 9 will have much more loft than a 4 or 5 iron because we focus more on height and accuracy than we do on distance in our short game.

Loft affects the trajectory of the ball as well as how much it spins, essentially determining how far the ball will travel.

Whilst it can be a very useful tool, it can also become problematic when you add more loft to a shot than is needed…

Typically, when adding more loft to our iron shots, the ball will launch higher than anticipated and will not go anywhere near as far as you would have hoped.

So what’s the solution to this?

The shaft is the long part of the club that connects your hands to the club face.

The angle that you’re holding the shaft when impacting the ball will affect the angle of the club face. i.e the loft.

To get as much distance as we can with our irons, you want the center of the club face to be hitting the ball at its equator, as this will apply more pressure and more speed.

Striking the ball further down the club face with too much loft will result in less distance. To eliminate this extra loft, you want the shaft leaning slightly forwards when impacting the ball.

This means that when you make contact with the ball, your grip should actually be ahead of the ball. This will really help you to hit the ball right in the middle of the club face, generating more power to hit the ball further.

If you watch a slow motion video of any of the best players in the world striking their irons, you’ll see their club in this exact position as they impact the ball.

You might have noticed that nothing is mentioned here about trying to swing your irons with more speed or power.

As a beginner in golf, you’ll soon see that further distance can be achieved with good technique rather than relying on power.

It’s very easy to get carried away and swing as hard as you can, only to scuff or even completely miss the ball.

This is because technique often goes flying out the window when we try to swing faster or harder.

Aim to be able to consistently strike your irons smoothly with good technique, and then you can start to think about speed and power. Don’t run before you can walk!

To be hitting the ball further consistently with your irons, get yourself down to the driving range, pick out a mid iron, and try to tick off the following:

If you can incorporate these into your golf swing, you’ll be teaching others how to hit irons further before you know it!

Now you know how to hit your irons further, make sure you’re playing with the right ones! 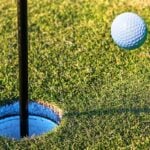